Warren’s stroke of genius was repackaging horror comics as black and white magazines, in much the same way that Bill Gaines had done with Mad Magazine back in the late 50s, thereby ensuring the survival of EC Comics. Warren had tested the waters by running comic strips in the pages of Famous Monsters of Filmland, the now legendary magazine that Forrest J Ackerman edited for him. The response to the comics was phenomenal.

Warren was encouraged to release a 68 page bi-monthly comic entitled Creepy, drawn by many of the original artists from EC comics. When Warren subsequently hired Archie Goodwin to edit the magazine, several issues later, Creepy really hit its stride. Goodwin was, without any doubt, one of the greatest comic writers and editors of his generation. Creepy was soon followed by sister magazine Eerie and eventually Vampirella. Jim Warren single handedly created an entirely new market, one that could circumvent the Comics Code authority and attract a more mature audience, because his publications were magazines, not comic books.

Every successful market breeds competitors and Warren was no exception. As soon as Warren’s success became known to the publishing industry, several of the less reputable outfits, like Stanley Publications and Myron Fass’s Eerie Publications, rushed out cheap imitations. These companies simply reprinted pre-code horror comics from the 1950s as black and white comics. Although Eerie Publications added extra blood to the tales, and later had the same stories redrawn and updated by cheaper Latin American artists.

Fass allegedly named his company Eerie, after he lost the right to use the name for a magazine. Both he and Warren were planning on releasing a black and white comic magazine called Eerie and the distributor would only allow one of them to use it. Because Fass was only running reprint material, he expected to reach the newsstands first. So Warren had a dummy version of his Eerie rushed out, using mainly reprints from Creepy He then bribed the newsstands near his office to display the magazine when the distributor came for a meeting. Convinced that Warren had beaten Fass to print, the distributor awarded the title to Warren. In retaliation, Fass dubbed his whole operation Eerie Publications.

Warren was generally very scathing about the quality of his competitors, and with very good reason. The quality of their product, while not without its own, trashy merits, was in nowhere near the same league as Warren’s magazines, which had the cream of comics’ talent at its disposal. It wasn’t until the appearance of Skywald Publications, at the very end of 1970 just when the black and white horror market was experiencing an upturn, that Warren had any real competition. Not surprisingly, Warren came to hate Skywald Publications the most of all his competitors.

Skywald got its name from the surnames of the two partners who founded it – Sol BrodSKY and Israel WALDman. Brodsky had been Marvel’s production manager and Waldman made his money repackaging out-of-print comics to sell in supermarket and chain store bargain bins. Skywald was a change in direction for them both and also an attempt to build a publishing empire that Waldman could hand on to his son Herschel.

When they first appeared, there was little to distinguish Skywald’s first two publications -_Nightmare_ and Psycho – from Warren’s Eerie or Creepy. They used many of the same artists and writers as Warren in their early issues, although quite a few of the artists worked under pseudonyms, because Warren had made it clear that anyone working for the competition would not work for him, and he still paid the best rates.

Things started to change when Sol Brodsky left the company and returned to Marvel to take up his old job. A young editorial assistant, by the name of Al Hewetson, took over the editorial reigns of Nightmare and Psycho and a third magazine was soon launched called Scream. Hewetson had begun his working life as a news photographer in Canada, but after he interviewed Stan Lee for a fanzine, Lee offered him a job at Marvel Comics as his assistant. Hewetson left a promising career in Canada and moved to New York. Although Hewetson confided in Lee that he had writing ambitions, Lee didn’t think his work was up to scratch at the time, and Hewetson wrote very little for Marvel in the end.

His first professional work was for Warren comics and Mad Magazine’s biggest competitor Cracked. Hewetson’s early stories aren’t great, but they aren’t awful either, they show a young writer learning his craft and searching for a voice. Brodsky remembered Hewetson from his time at Marvel and offered him work at Skywald, first as a freelance writer then as an assistant editor. Hewetson had actually been fantasizing about the new direction he would take the Skywald magazines, if he were editing them, the night before he strode into the Skywald offices to be told Brodsky was leaving and he was being promoted.

Hewetson was just coming into his full powers as a writer when he assumed editorial control of the Skywald magazines. His early stories for Skywald show a growing maturity, along with a marked ingenuity when it came to plots and concepts. plus a willingness to push the boundaries of good taste and formal experimentation. It was with the same spirit that he took on the role of editor and announced the arrival of the ‘Horror Mood’.

Defining what the ‘Horror Mood’ actually is, is not an easy thing to do. Like certain types of music, it’s one of these things you either get or you don’t. Originally, Hewetson wanted to rename the the whole imprint and call it ‘Horror Mood’ rather than Skywald. Waldman was in favour of this, until their accountant told them it would cost them too much money and lose them vital space on the newsstands. Instead they went with the compromise of calling them: ‘Skywald Horror Mood Publications’.

The ‘Horror Mood’ is far more than just a clever brand though, in essence it’s a philosophy for creating horror fiction and a fresh way of perceiving and presenting horror as a medium. At the heart of this new approach lie three things. A desire to innovate, to tell new stories in new and interesting ways. A fearlessness when it comes to extending the parameters of good taste, to take on taboo subjects and depict violent and gory scenarios in order to genuinely terrify, repulse and scare the reader. As well as a willingness to use horror to address weighty social and philosophical themes, coupled with a recognition of the long literary heritage that horror enjoys, most especially from the works of Poe and Lovecraft, who were very influential on the stories Hewetson began to run.

There was one other change that had a huge effect on the direction of the Skywald Horror Mood, that was the exclusive deal that Herschel Waldman cut with a Spanish agency – Selecionnes Illustradas, to provide artists for all the magazines, just before Hewetson was made editor. These artists, from Europe and Latin America, brought a new sensibility to their work that was different from anything their American contemporaries were doing. The way they approached light and shadow, form and substance and the page layouts they adopted, gave the Horror Mood magazines a new look that set them apart from anything else on the newsstand at the time.

In time Hewetson would put together a virtual bullpen of new writers and artists, from three continents, that he dubbed the ‘Horror Mood Team’. Hewetson was keen to encourage reader identification with these creators and he gave them nicknames such as Dreadful DeLaRosa, Lunatic Cesar Lopez, Emotionally Disturbed Ed Fedory and Awkward Augustine Funnell. They even began to appear in the comic strips as themselves, either introducing the story, like the old EC horror hosts, or as characters directly involved in the action. Hewetson himself appeared in many stories in his guise as Archaic Al Hewetson.

Over the next three years the Horror Mood publications not only thrived, and built a huge international audience of over a million readers, they also broke a lot of new ground in horror fiction. Almost all of the later development in horror, especially throughout the heyday of the 80s, can be traced back to Hewetson and the Horror Mood, who proved to be way ahead of their time in many ways. The Horror Mood titles blazed a trail that any horror fan in the know soon caught on to, this even included a struggling, young writer by the name of Stephen King.

I will go into more detail about the direction of the ‘Horror Mood’, the stories they ran and the legacy they left behind in my next blog, be sure to come back and read it next week.

If I’ve whetted your appetite for some ‘Horror Mood’ action, and you’d like to read one of the most popular series that ever ran in Nightmare and Psycho, then I strongly advise you pick up Monster Monster, the graphic novel that George is putting out later this year, which collects together the whole of the series and includes two new installments that have never been published before, finally bringing this epic saga to a conclusion that many horror fans have waited over four decades to read. You can’t really go wrong with that now can you?

Trust your Uncle Jasp on this, you know it makes sense. 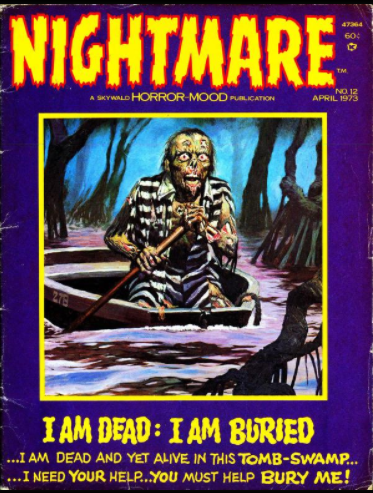