This is a story that’s never been told. It’s about the tragedy that followed one transcendent moment of triumph. It concerns a true entertainment icon – the Muppet known to millions as Mahna Mahna.

Until now, no one dared breath a word of this story. Maybe they feared for their careers. Perhaps they wanted to protect the Muppet brand. Or possibly, just possibly, they didn’t have to write a blog entry without a single idea in their heads. Whatever the case, the telling of this tale falls to me, a lowly horror writer with nothing to lose, except the time I spend writing this.

BEFORE HE FOUND FAME

Like those other musical greats – The Beatles, our purple skinned prankster first hit the big time when he played The Ed Sullivan Show in 1969. At this point, he was performing under the name Bip Bippadotta, and had yet to adopt the Mahna Mahna moniker. He was keen to show he was more than just a vocalist, flaunting his skills as a multi instrumentalist. In his second appearance on the Ed Sullivan show he played Beethoven’s minuet in G Major with a string quartet, but instead of a violin he chose to play a drum kit.

We don’t know how influential this performance was on Keith Moon, but we do know a young muppet called Animal was in the audience that night. Animal’s drumming owes everything to Mahna. If not for Mahna’s influence, Animal wouldn’t have found fame with Dr Teeth and the Electric Mayhem. This wouldn’t be the last time someone else got rich off the back of Mahna’s talent.

The song that shaped Mahna’s career was written by Piero Umiliani. It was inspired by the cry of the amorous goatherd calling his flock home. It was written for the soundtrack of Svezia, inferno e paradiso an Italian soft-porn film set in Sweden.  The song was originally called “Viva la Sauna Svedese” (Hooray for the Swedish Sauna) because it accompanied a scene depicting Swedish sauna hi-jinks.

Quite what this says about the Italians’ view of saunas, or the Swedes’ peculiar love for their goats, is anyone’s guess. However, the song became a minor European hit in 1968, which is when Mahna may have heard it. The song was perfectly suited to Mahna’s vocal stylings and he originally performed it on Sesame Street. This performance was missing one vital ingredient. An ingredient that would propel not just Mahna Mahna, but the whole Muppet Show to fame – the Snowths 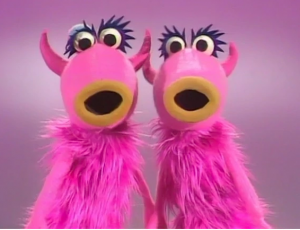 We don’t know much about the Snowth sisters. Where they come from, and what they did before, is a mystery. They were originally called Snouths, because their faces were half snout and half mouth. However, like many foreigners trying to break into Hollywood, they probably changed their name to suit a western audience.

The Snowths were nowhere near as talented as Mahna, but they did have better business heads. Their partnership with Mahna would prove fortuitous for all of them. But for Mahna, this change in fortune would prove to be a double edged sword.

On January 26th 1976, Mahna Mahna and the Snowths made history when they performed the opening number of the first ever Muppet Show. The Muppet Show was an overnight success, and Mahna topped the charts all over the world. This short song would become the quintessential Muppet sketch. Ask anyone to name more than one Muppet song and chances are they’ll mention the ‘Mahna Mahna song’. It’s become synonymous with the Muppet brand.

Mahna went on to appear with guest Juliet Prowse, and the ageing hecklers – Waldorf and Statler, in the same episode. The public couldn’t get enough of him. In the next episode he showcased his drumming skills, once again, as he showed up both Scooter and Zoot in a skit called Sax and Violence. The sketch ends with Zoot blowing Mahna Mahna up, out of jealousy. Given how his whole career seems to explode after this (and not in a good way) this sketch seems a little ominous in hindsight.

The Snowth’s went on to enjoy a long, if unvaried career, singing the same song with such luminaries as Miley Cyrus, Matt Vogel and Peter Linz. While poor old Mahna is relegated to a background character from this point on. So how did our purple skinned protagonist go from being the show’s unofficial mascot to an unnamed audience member after only two shows? Why did he never become a household name like Kermit, Miss Piggy or Gonzo the Great?

I suspect the seeds of Mahna’s downfall can be found in his one moment of crowning glory. You see, this skit is more than just a reworking of some cheesy Eurosleaze. It’s a mini psychodrama that sums up the struggle between commercial success and artistic integrity. A struggle every artist has to face.

Don’t believe me? Let’s take a closer look at the famous number:

We start with the Snowths carrying the melody we know and love. Soon they’re joined by the star of the show, adding his signature ‘Mah Na Mah Na’ to the mix. This is fine, until about 0.24 seconds into the song, when Mahna remembers he has the soul of a true artist and he can’t keep it under wraps any longer. So he launches into an irrepressible burst of skat singing, riffing off the melody with all the assurance of Charlie Parker or Miles Davis.

How do the Snowths respond to this? Not with encouragement and approval. Their harsh stares seem to say: “Stick to the script. Give the public what they came to hear. Remember what you’re famous for. Everyone knows you as the Mahna Mahna guy. We’re onto a good thing here. We could be made for life. Don’t mess this up!”

So , Mahna gives them what they want to hear. The four syllable, single bar phrase: “Mah-Na Mah-Na”. The Snowths are happy once again and the song goes back to its normal state. But Mahna isn’t happy. The spring has gone from his step, and the Snowths eye him warily as he paces back and forth across the screen.

Then, 0.45 seconds into the song, Mahna loses control and the skat comes pouring out of him. Only now he’s not singing to the millions of viewers across the world. He’s directing his skat at the Snowths, he’s trying to show them the endless possibilities that lie within the tune. “Look how good this number could be if we only pushed ourselves as musicians”, he seems to be saying. The Snowths just stare blankly at him, unable to understand his artistic yearning. Finally, his verve crumbles, he stops trying to win them over, and returns to the old commercial formula – “Mah-Na Mah-Na”. Only now his performance becomes more anarchic and disruptive. Sensing this, the Snowths try to put on a brave face.

Then, at around 1.13, Mahna adopts a different approach. Like the film makers of 50s Hollywood, who snuck expressionist art and psycho-sexual themes past the censors, by slipping them into a sensational story. Or the 70s rockers who tried to hide complicated jazz themes in otherwise commercial music, Mahna Mahna tries to sneak around the back of the Snowths and smuggle his envelope pushing skat into the song.

The Snowths close ranks and Mahna looks as though his heart is going to break, right there on the screen, as he goes back to that same little phrase he’s been singing for the last seven years – “Mah-Na Mah-Na”. He slinks into the background, hardly engaged anymore. The skat singing, that he just can’t stop, becomes a defiant mumble, the rebel mutter of an artist worn down by the bitter truths of showbiz.

At 1:45, just when all seems lost, he rushes back to the front of the screen and yells “Mah-Na Mah-Na”. At first the Snowths are overjoyed. However, what seems like a return to form is anything but. “This is what you want is it?” Mahna seems to be saying, as he spits the phrase at the audience. “Okay you can have Mah-Na Mah-Na, but you won’t take my spirit and you can’t crush my soul.” And with that he exits the stage, and leaves the theater, angrily rebuking Kermit with same phrase that has just made him a household name.

Finally, at 2:09, like every true artist ground down by the crushing truth of the entertainment industry, he gives up hope and he stops caring. Like Marlon Brando in every movie after Apocalypse Now or David Caruso in every episode of CSI Miami, Mahna simply phones in his performance and closes the number.

The entire trajectory of a once promising career, cut short by the hard nosed realities of popular culture, plays out in front of us, in just over two minutes.

THE QUESTION IS – WHAT’S A MAHNA MAHNA?

If, like Waldorf and Statler, you think the answer is: “Who cares?” Then I’d ask you to think again.

This little skit is a modern day fable. It’s a cautionary tale for every artist, singer, poet, musician or individual who’s struggled against an uncaring world hellbent on killing the one thing that makes them unique.

It’s a parable for every one of us who’s ever pushed against the boundaries of a soul destroying job. Who’ve gazed out of our workplace window and longed to shout: “Why are we doing this mindless, repetitive crap? We could be so much more than this!”

Maybe Mahna burned a little too brightly and faded too fast. Maybe he never became the household name he should have been. Or maybe I’m just reading way too much into a programme principally aimed at children.

All the same I’d like to raise a glass to a kindred spirit and salute the patron saint of every wild-eyed dreamer who’s ever battled with the Snowths in their own lives. Here’s to a true artist and a musical visionary.

Here’s to you Mahna Mahna, wherever you are!

Trust your Uncle Jasp on this. You know it makes sense.

4 thoughts on “The Muppets and Mahna Mahna – the Untold Story!”